“The National Security Apparatus Is a Black Hole Right Now”: As Law Enforcement Clamps Up, Journalists Are Filling the Capitol-Siege Info Vacuum

Five days after a mob of pro-Trump extremists invaded the United States Capitol building, federal law enforcement agencies tasked with investigating the historic security breach have failed to adequately brief the press. “The national security apparatus is a black hole right now,” said Spencer Ackerman, who covers national security for the Daily Beast. “We’ve yet to get much in the way of substance out of the FBI or DHS, and a lot of opacity remains about what exactly happened with the D.C. National Guard.”

Journalists have helped fill the information vacuum. Deeply reported accounts of the siege have been published in major news outlets, providing a flurry of revelations that the situation was even more dire and horrifying than initially thought. Reporters and lawmakers have shared stories of hunkering down in offices and secure locations while the mob ran wild around them. Harrowing footage of Capitol police under attack has been broadcast on cable news and social media.

But as New York Times national security correspondent Adam Goldman noted Sunday night on Twitter: Neither “FBI Director [Christopher] Wray nor David Bowdich, the deputy director in charge of operations at the bureau, has held a news conference where reporters could ask questions. Neither has Jeffrey A. Rosen, the acting attorney general. Neither has John Demers of DOJ National Security Division…. Two prosecutors from DC, including Ken Kohl (of the Flynn case), spoke with reporters on Friday along with the top agent in the FBI Washington Field Office. They answered a few questions for about 30 minutes from select reporters. I was not one of them…. At the moment, the face/voice of this crisis appears to be Michael Sherwin, acting U.S. attorney for the District of Columbia.”

I asked Goldman if the lack of official information was as stunning as it seems. “This is an extraordinary moment in American history and a terrifying one,” he said. “The U.S. Capitol was overrun. They were more than happy over the summer to come out and talk about rioting” during the Black Lives Matter protests, “but here we have an attack on the nation’s Capitol and there’s almost silence. How is the face of this investigation, and I say this with no disrespect to him, an acting U.S. attorney in Washington?”

Legal experts have also called out the dearth of details from law enforcement. “The silence – the sense that there is not even information accountability to the public – gives this moment a true sense of authoritarian control,” Sherrilyn Ifill, president and director-counsel of the NAACP’s Legal Defense and Educational Fund, tweeted Sunday, adding Monday that “we haven’t even had a briefing from federal law enforcement explaining what the hell is going on and how they’re going to protect this country from the planned armed marches against state capitols and D.C. between the 17th & 20th.”

The FBI, to be fair, has been keeping the public abreast as it arrests and charges people who were involved in the ragtag putsch, as well as crowdsourcing Twitter to help make identifications. (The FBI also issued a bulletin notifying law enforcement agencies about possible armed protests at all 50 state Capitols in the coming days.) But news organizations have been doing a huge amount of investigative work as well. The AP, for instance, “reviewed social media posts, voter registrations, court files, and other public records for more than 120 people either facing criminal charges related to the January 6 unrest or who, going maskless amid the pandemic, were later identified through photographs and videos taken during the melee.”

Local news outlets all over the country have likewise been pounding the digital pavement, as it were. The Atlanta Journal-Constitution tracked down and exposed McCall Calhoun, a Georgia lawyer and self-described “Anti-Communist Counter-Revolutionary” who was among the first to get through the doors. “It probably wasn’t the best idea,” he told the paper of the mob that left five people dead, including a Capitol police officer, “but it was what this group of people did; they did it for the love of America.” In Boise, Idaho, a CBS affiliate found Josiah Colt, the man who was photographed jumping down onto the floor of the Senate chamber. “I recognize my actions that have brought shame upon myself, my family, my friends, and my beautiful country,” Colt pleaded to CBS2 News. “In the moment I thought I was doing the right thing. I realize now that my actions were inappropriate, and I beg for forgiveness from America and my home state of Idaho.”

At the Times, Goldman has spent most of the past several days going down digital rabbit holes, as his secure email address has been flooded with tips from enterprising readers. In one such exercise Goldman spent five hours trying to connect the dots of the man who was photographed traipsing around the Capitol with an enormous Confederate flag. When he finally called the individual his reporting had led him to, it turned out to be the wrong guy. “He was shocked,” said Goldman.

The Unbearable Whiteness of Storming the Capitol 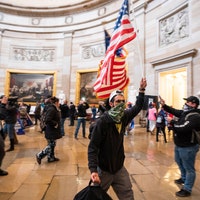 But these efforts do bear fruit. In another case Goldman and his colleagues pinpointed Robert Keith Packer, the man who was seen wearing a “Camp Auschwitz” T-shirt. (Packer also was identified by CNN.) They had a stringer knocking on doors in Packer’s Virginia neighborhood in no time. “What’s amazing about this,” said Malachy Browne, who oversees visual investigations for the Times, “was that the media were hunted away from the area around the Capitol, and yet the protesters documented it from every different angle, incriminating themselves.”