The Trump era began in 2015 with his absurd journey via gilded escalator to deliver one of the most succinct statements of public racism we had seen in years. (“They’re rapists” still chills me, even after all these years.) Two years later, we had Charlottesville and his “very fine people on both sides” comment. Before Trump, we weren’t accustomed to consuming images or processing experiences that combine stupidity and real threat in such rapid succession. We still aren’t great at it now, but at least we’ve gotten some experience in the unsettling and banal side of violence—and how little it matters whether or not you call it a “coup.” 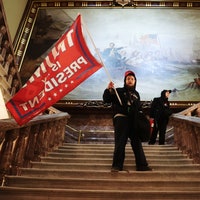 As the Trump era comes to an end, at least on paper, the defining image of its close may well be the shit-eating grin of a middle-aged white man with his feet on the desk as if he owned the place. While his workwear lent him an ordinary air, the president knew better. He was, in the words of Trump, one of the “very special.”